This one year AHRC-funded follow-on project, running between 2018-2019, aimed to foster collaboration and innovation to present the fascinating story of Thomas Becket to visitors to the city of Canterbury. The project brought together partners from Canterbury’s heritage, business and tourism sectors, including Canterbury Cathedral, Canterbury Archaeological Trust, Visit Canterbury, Canterbury Museums and Canterbury BID.

Canterbury boasts UNESCO world heritage site status, highlighting its cultural and heritage significance. From the Cathedral and numerous extant buildings from the 15th Century, to hidden heritage masked by developments, old and new, there is an abundance of opportunities to present information and stories to visitors to the city. We hope to realise as many of these opportunities as possible.

2020 marks the the triple anniversary of St Thomas Becket’s birth, martyrdom and translation to Canterbury Cathedral and this project aims to foster collaboration and innovation, and to present the fascinating story to visitors to the city.

The main research questions were centered around the construction of a fully-realised model of Canterbury in c.1450. The research ranged from details on specific buildings extant within the city walls, to archaeologically and historically accurate reconstructions of houses and buildings no longer upstanding. Through very in-depth research the team was able to ascertain what type of architecture would have been visible in the period, and perhaps more importantly what wasn’t.
The model itself became a catalyst for a variety of workshops, interactive resources for schools, exhibitions, in all offering a new visual platform for broadening tourist engagement with Canterbury.

Our strategy was ‘phased’, and with the creation of the model we built a platform and a catalyst from which various partners could have their own resources tailored. ‘The project was extremely ambitious with its scale, but with its creation the opportunities and value of the model were truly realised’.

The project began with the creation of several direct lines of communication with project partners, something that was maintained throughout the entire project, a preliminary phase. Focussed research marked the next phase, collating data to inform the digital modelling. The modelling itself marked the main ‘action’ phase of the project, creating the output from which future work would be based. A critiquing and troubleshooting ‘corrections’ phase marked the latest phase of the project. After multiple conversations with partners, including Canterbury Archaeological Trust, the final renders of the city were agreed upon and created. These images were put on social media in a somewhat informal capacity but the overwhelming response from specialists and members of the public alike was taken into account. By phasing the project this way we were able to achieve the project aims on schedule and to a high standard.

Using the research to directly inform what would be built and how it would appear the modelling recreated Canterbury how it would have appeared around the year c.1450. Certain types of architecture were more common or simply didn’t exist in certain periods of time- this was heavily reliant on extensive research throughout the project. Extant buildings were also built with research identifying separate building phases. In some cases windows and doors were added or restyled, other buildings were extended and altered in form. In the case of the Parrot Inn near Northgate there were details on a door and with particular beam patterns that were identified and recreated. Not all of the information, including the previously mentioned fine details, are noticeable from the main overhead images rendered so far. This was modelled to a high-level of detail with the intention of being able to later render close-ups of specific areas of the city.

The main output of this project was the city model of Canterbury. It included the city walls, gates, towers, and everything within them. It also extended out to include St Martin's and St Augustine’s to the east of the city. Resources and further outputs from this are ongoing and will have more information available when completed. 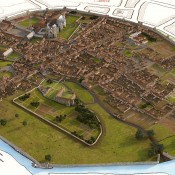 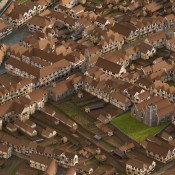 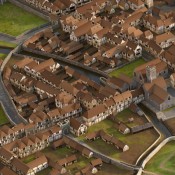 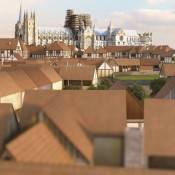 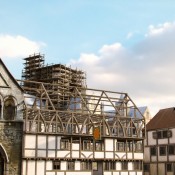 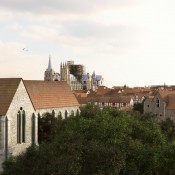 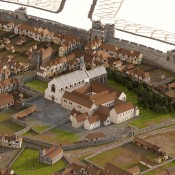 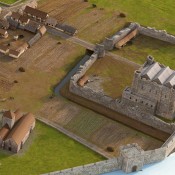 Becket Connection - The Castle was in a poor state of repair in c.1450 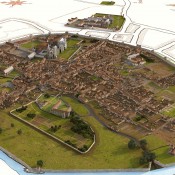