We began a three-year interpretation project with Lichfield Cathedral in 2015, with the first phase being delivered in spring 2016, phase 2 in 2017 and phase 3 in two stages completing in early 2019. The project explores three discrete but related areas of the cathedral's history and life via on-site touchscreens, a mobile app and supporting material.

The first phase focuses on the Lady Chapel's extraordinary 16th century stained glass from Herkenrode Abbey, which was cleaned and conserved in a major project completed in 2015. The two touchscreens located in the Lady Chapel allow visitors to explore the glass in detail, explaining the iconography and stories, as well as find out about the conservation project and the fascinating history of the glass. You can find out how and why some of the finest surviving 16th century Flemish glass ended up in Lichfield's Lady Chapel in the early 19th century and what happened to the rest of the abbey's treasures.

The second phase focuses on the life and times of St Chad, the 7th century bishop of Mercia and Lindisfarne to whom the cathedral is dedicated. Lichfield is unique in having its first bishop as its patronal saint and it was Chad's cult which established Lichfield as the centre of the episcopal see. This phase explores Chad's life and influence within the wider context of the much-overlooked history of the Kingdom of Mercia and provides visitors with the opportunity to consider their own life and experience in the context of some of the hauntingly lovely Anglo-Saxon works of spirituality. Extracts of Old English prayers, poetry and psalms connect us with Christians from Chad's time who were facing many of the same life questions and doubts which challenge people today.

Two extraordinary treasures from the 8th century survive in Lichfield and this phase also helps visitors to understand them and reflect upon the world which created them. The first is the Lichfield Gospels, also known as the Chad Gospels. Although they date from around 50 years after Chad's death, they were possibly made for the church which he established and which grew in importance as his cult flourished. Comparable in some respects with the Lindisfarne Gospels and influenced by them, this gospel book dates from the early 8th century and (apart from a brief 9th century sojourn to Wales) has been in Lichfield continuously since the mid-10th century. The second is the breathtakingly-beautiful Lichfield Angel, a sculpture fragment thought to be from Chad's shrine and dating to c.800AD. Discovered in 2003, this exceptionally well-preserved fragment of an Annunciation scene retains some of its original pigment and tells an evocative and hitherto unknown story of the importance of Mercian art and culture in this period. Parts of this phase are presented through a touch-screen, but a mobile app will allow people to explore the spirituality of the period in private and in their own time, able to return to it as they wish once their visit has ended.

The first stage of the third phase explores the later medieval shrine of Chad and the roll and importance of pilgrimage to people then and now. Lichfield cathedral was built to serve the pilgrims coming to Chad's shrine and many people today come seeking some kind of solace or support, or to celebrate and give thanks. This phase recreates in digital form the exquisite main shrine as faithfully as possible from the evidence in contemporary documents and allow visitors today to see how the shrine was the focus for the medieval cathedral. It also provides virtual access to the Head Chapel for those unable to climb the stairs and offers an artist's impression of the head shrine which was once housed there and displayed to pilgrims from the balcony. Alsongside the historical story, it also explores modern ideas of pilgrimage and life-journey and offers resources for visitors seeking more from their visit than simply the traditional historical content. It is an exciting project and one which helps give some well-deserved prominence to Mercian and Midlands history and culture. The second stage is providing more contemporary resources for visitors of all ages through an orientation touchscreen, booklets for the shop and a mobile app trail. 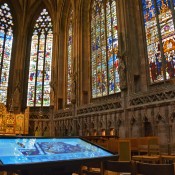 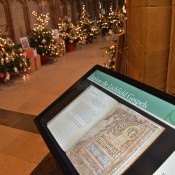